Children’s TV show Blue Peter is British institution, having been broadcast, uninterrupted since 1958. It’s safe to say it has delighted generations of children and has, for better or worse, reflected its times. Yet, their good faith efforts in the realm of the time capsule tell us a lot about the perils of trying to preserve things for posterity.

Blue Peter began in 1971 with a simple sealed wooden box and plastic wrapped objects. In addition to a can of film holding one of the show’s segments and a reel of audio tape with its theme music, there was a history of the program – typed out and stapled, naturally – some Blue Peter annuals and books, a photo album plus a copy Radio Times so you could see what else was on at the time. Most pertinently, a set of the new decimal coins, issued in the UK only that year. The box was buried outside BBC Broadcasting House and a new sapling planted over it. 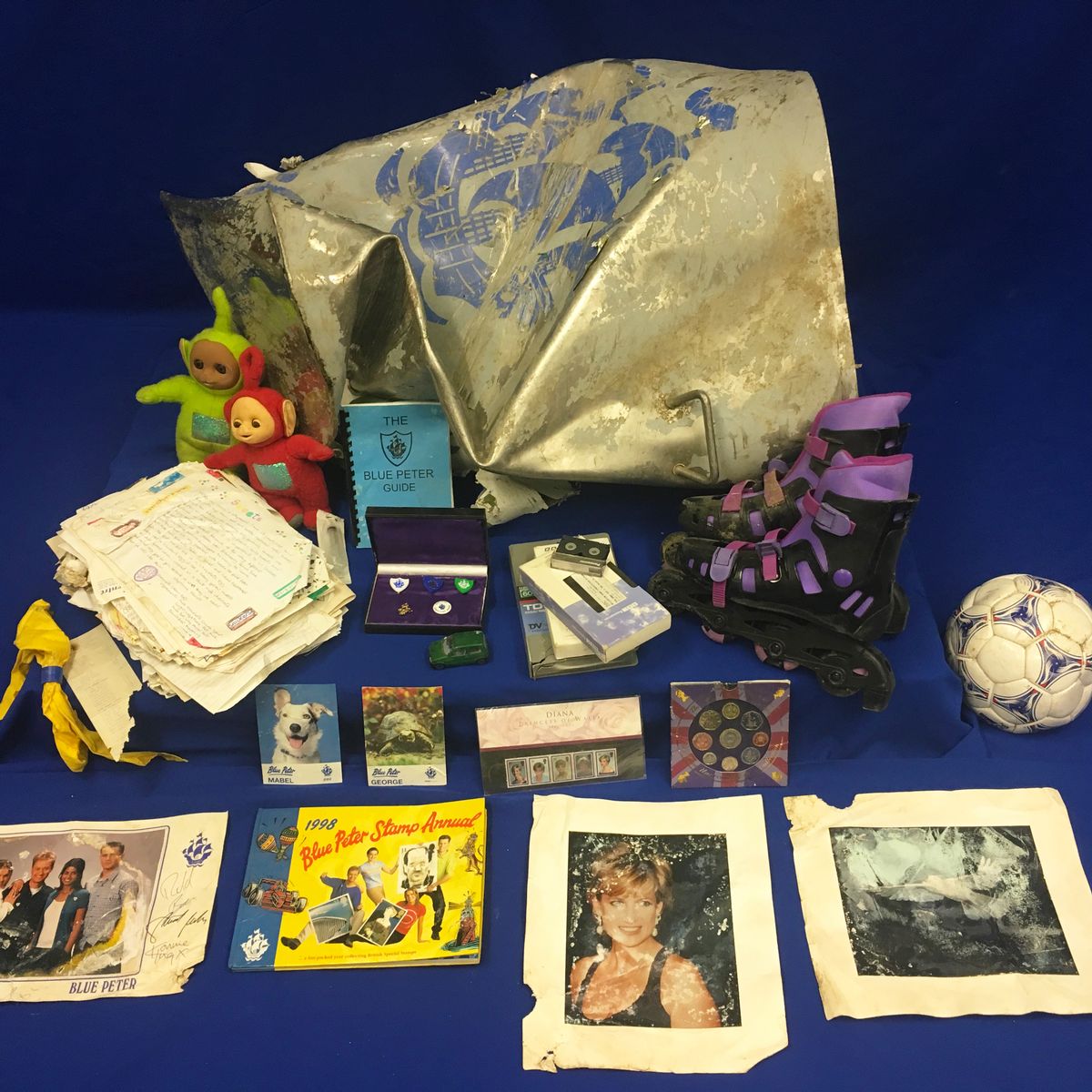 In 1984, renovation of the studios meant that the capsule and tree needed to be moved. The box seemed undamaged, so a new 1984 variant was buried with it to the same specifications. Inside, a new VHS video tape of the show, a vinyl single of the theme tune, by now recorded by Mike Oldfield, joined the usual annuals and photo albums.

Someone must have had an inkling as to the likely fate of the ’71 & ‘84 capsules, as the 1998 Capsule, to be buried under the Millennium Dome in Greenwich until 2050, was of a much more robust design. The metal box contained a diverse and bizarre range of cultural objects as it was chosen by the viewers – which ironically provided a much more vivid picture of the time than any previously buried.

When the earlier capsules were unearthed, as live, by the original presenters, the boxes revealed that the box had not been watertight and neither had the plastic wrapping, which had served to submerge the contents in water. Even after expert restoration, most of the paper was destroyed. The film segment was unwatchable, the vinyl record scratched and the video tape unplayable.

Even the tree that was planted over the first capsule and subsequently moved was ill thought out in retrospect. Silver birches do not, in fact, live very long and its 29 year survival was something of a surprise to horticulturalists.

The 1998 capsule was then unearthed and broken by builders at the former Millennium Dome in 2017. They claimed that they had not been able to obtain the capsule’s location from the BBC, but returned everything…except the Spice Girls CD which is missing to this day.

Yet it was the act of burial, of ceremony, that became the point, or perhaps it always had been. It was the formats themselves that provided the sense of a time-shift. The VHS and reel to reel tape, vinyl 7” singles and film cans, signifying some fundamental changes in technology and culture. There was the ongoing health and wellbeing of Valerie Singleton and the others in 2000, when the famous pets were no longer with us. Fashions had cycled. The buried annual did not survive, but someone had preserved one, above ground, in order that the time capsule would be remembered. The shows drew multigenerational attention, with thousands of viewers, past and present, writing in to remind them, as requested back in 1971.

Those of you who think that I’ve forgotten the Blue Peter Badges buried in each capsule, fear not. On each occasion they survived, undamaged. One suspects that they’ll be the last things to disappear, long after human civilisation is gone.