The 2269 project is a never-before-attempted experiment in storytelling and time, aiming to bring about a meaningful, global event in the distant future.

By engineering a multigenerational chain of events, starting in 2019, our ultimate objective is to bring people together around the world for ‘the Greatest Party of All Time’ – a celebration independent of nationality, language, religion or politics – on June 6th, 2269.

It is an outlandishly ambitious goal designed to remind people today of the bigger picture: life is short, but history is long. Recognising the deep affection we all have for rituals, stories and belongings handed down through our families, we are sowing the seed of an idea today that has potential to grow into something spectacular. 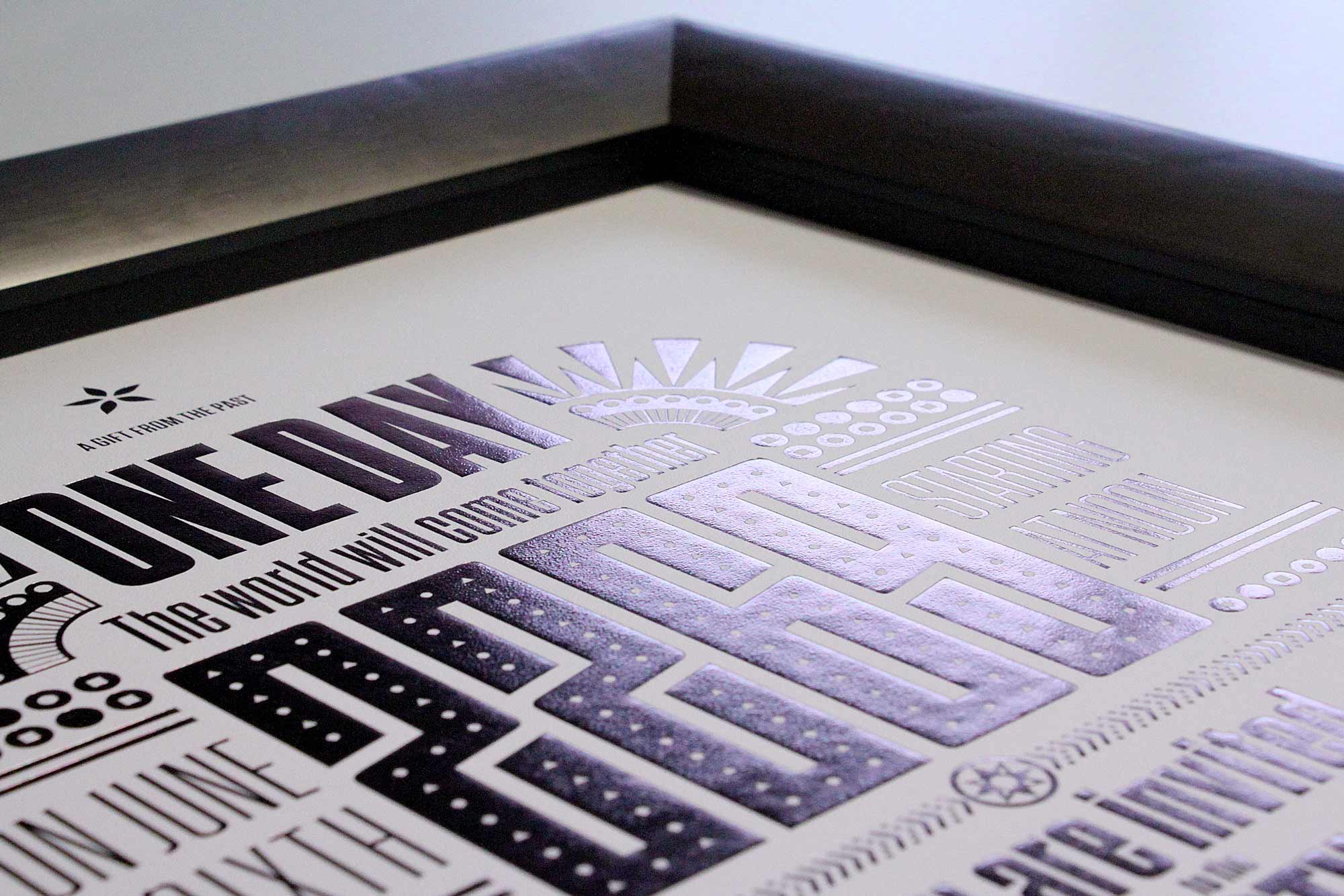 To bring this idea to life, in 2019 we began selling a beautifully produced poster, an invitation designed to stand the test of time and to be passed from one generation to the next. The print is foil-blocked on archival paper and each copy is digitally numbered using pigment ink to add an element of individuality.

The invitation poster is currently in English. We are already in the process of translating it for other languages and cultures with the intention of reaching as many people in as many countries as possible over time.

Introducing this simple invitation today begins a compelling story that builds over time – a legend for the 23rd century. And everyone can participate. Each print comes with a unique ‘Record of Owners’ document that every subsequent owner is required to sign and date. Imagine receiving a print signed by your great grandparents knowing that your own great grandchildren will one day receive it too. 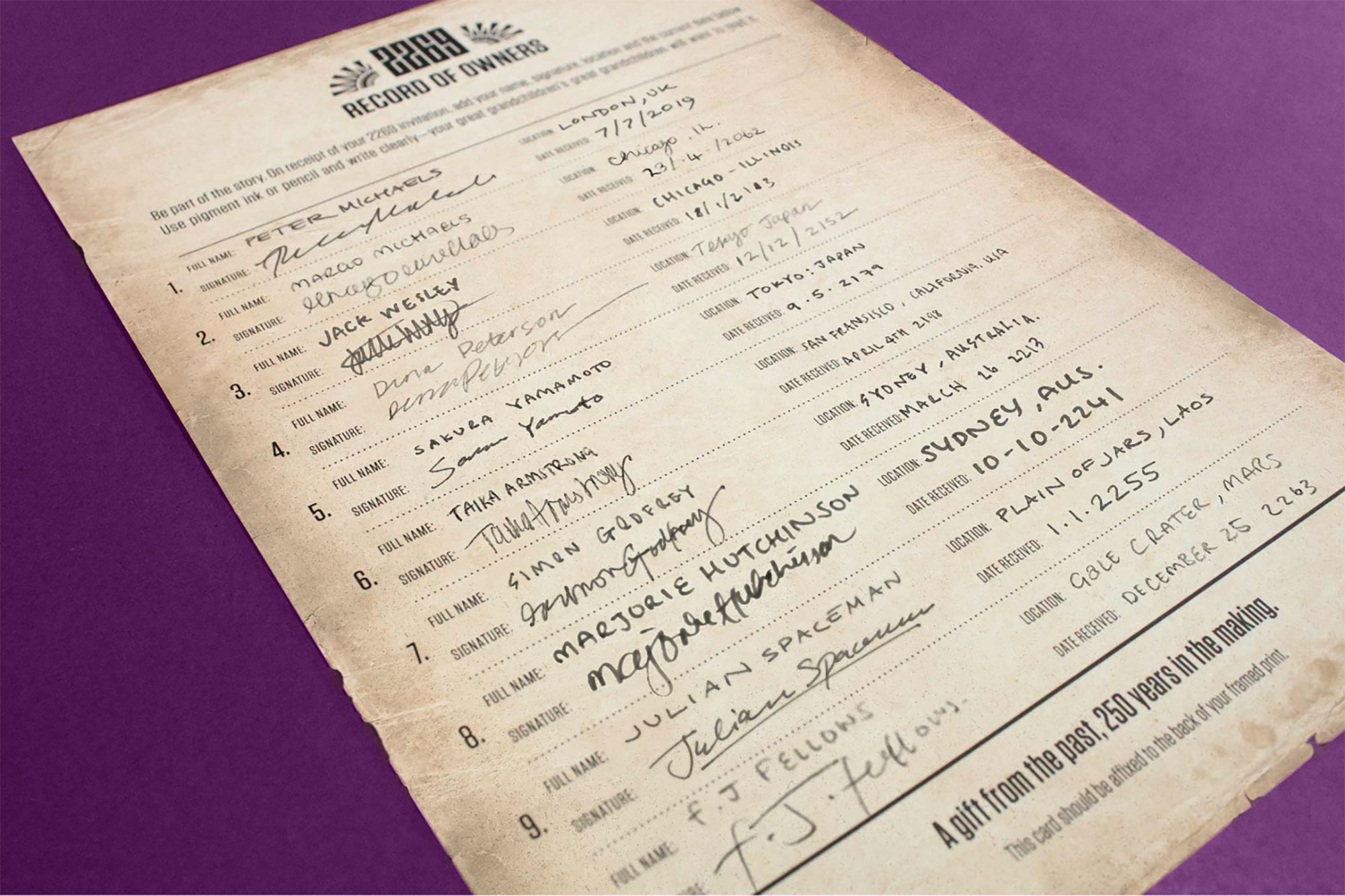 Why is the 2269 project relevant today?

Partly a reaction to challenging times characterised by short-term thinking, 2269 is inspired by the world we live in. Intending to spark a new conversation about the bigger picture, our aim is to give the next generation a ‘gift from the past’ as a symbol of hope. We can all work towards a better future if we can imagine it first.

Many of us would like to leave something of value behind at the end of our lives. This project perhaps allows us all to be philanthropists and to leave a meaningful legacy just by doing something small and simple today – putting up a poster, keeping it up, and passing it on – that can lead to something significant in the future. 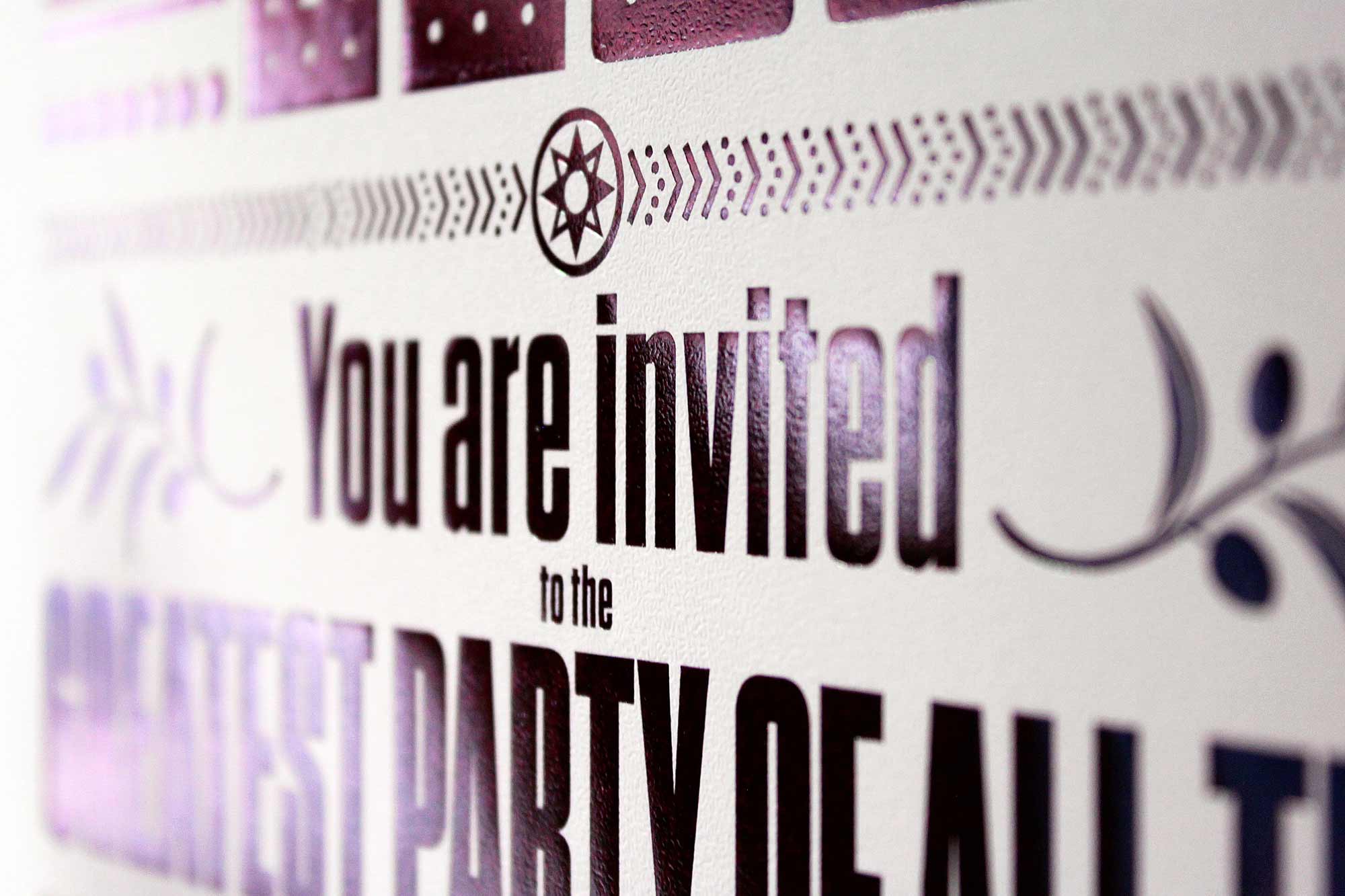 More than a poster

The 2269 invitation poster is our low-tech way of creating a long-lasting physical manifestation of our idea. But there are other ways of reaching people and fulfilling our project aims. With this in mind, we have created: the 2269 Trust to harness the long-term power of compound interest; the 2269 Pantheon, a means of getting the invitation to people that we believe represent the ideals of this project; the 2269 Podcast, an entertaining monthly show where the star already has one of our invitations; and One Day, an annual event every June 6th that brings people together in anticipation of the Greatest Party of All Time on 6/6/2269. 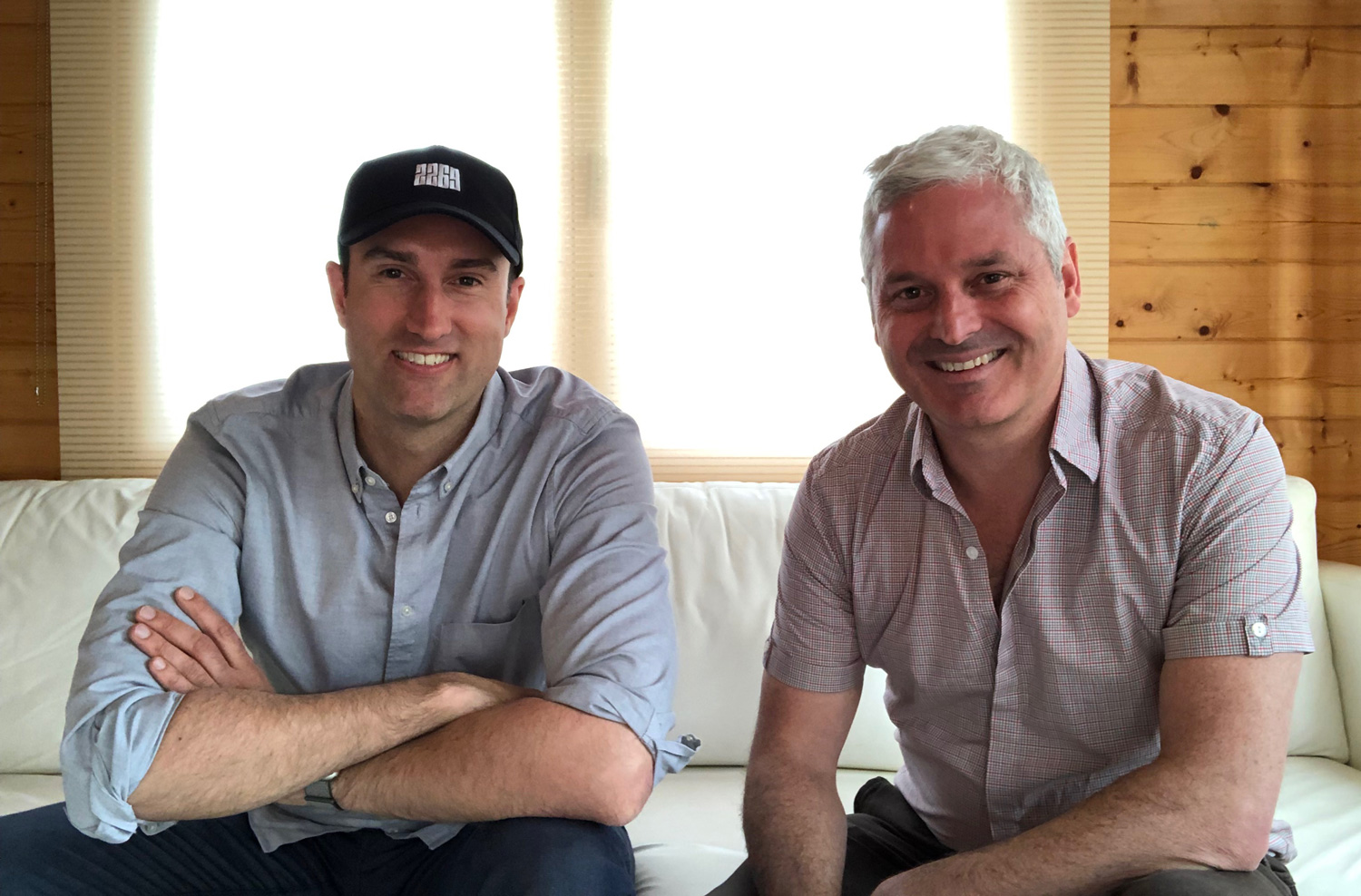 The 2269 project was created by Peter Dean and Michael Ogden.

Peter Dean runs Kite where, in 2012 he painstakingly recreated the Victorian circus poster that inspired John Lennon and Paul McCartney to write the song Being for the Benefit of Mr Kite!. The following year, and with a little help from his friend Michael Ogden, he created the Time Traveller’s Invitation poster at the heart of Stephen Hawking’s famous experiment. In addition, Peter runs Novagram, a creative agency in London.

Michael Ogden is an award-winning Creative Director. He has successfully developed original concepts across multiple platforms. Michael has directed a virtual reality experience now out in 130 arcades, co-authored 2DO Before I Die, a non-fiction book of ideas published in 9 languages, worked extensively with Pixar’s story team, created and co-hosted CrowdScene, a podcast about entrepreneurs, and led a creative concepts team at Sony PlayStation.